The Number One Secret To Getting Your Ex Back

What’s the #1 secret to getting your ex back?

What is it that separates those who fail and those who actually do build a new, healthier relationship with their ex?

The secret to winning your ex back is to fundamentally change the way your ex thinks about you and your relationship.

To re-wire their brain so that when he or she thinks about you, they think about your positive qualities, how much fun you are, how many great memories you’ve shared and how great life is when you’re by their side.

This is crucial right now, if you’ve been dumped or if your ex isn’t interested in giving the relationship another shot, then he or she almost certainly thinks of you in a negative light.

Even if your breakup was totally amicable and he or she has told you they still love you, the reality is that your ex just doesn’t think of you as someone they want to be with.

If your breakup was ugly or you’ve made a lot of mistakes since the breakup, it’s even more likely that he or she sees you as “that desperate loser ex”.

If you want him or her to take you back, then you need to change that. You need to make sure that they think about you in the same way they did when your relationship began, when things were amazing and you were madly in love.

If your ex were to feel that way about you again, if thinking about you brought a smile to their face and sent a surge of attraction through their body then he or she wouldn’t even think twice about getting back together. So, really, the key to winning back your ex is to re-wire their subconscious perception of you.

You want them to feel like they need you in their life and stimulate the kind of strong emotions and feelings of attraction that will overpower logic or reasoning.

If you do this properly, then all the reasons your ex has given for the breakup will become meaningless or be forgotten completely.

We humans are emotional creatures and we’re slaves to our sexual and emotional desires so if you can stimulate those feelings in the back of your ex’s mind, then he or she will come crawling back to you asking for another chance.

“That’s a fair question to be honest. But if you think about it, what most people in your situation do is actually the complete opposite of what I just described.

Most people and I can’t blame them, because it seems perfectly logical, try to convince their ex to take them back.

They beg, plead or just generally reach out to their ex and attempt to do things that they think will change their ex’s mind about the breakup.

In fact, most of the time, any attempts to talk with your ex after the breakup will harm your chances and drive him or her even further away.

Begging, pleading, apologizing, bribing. It’s all absolutely awful because all it does is re-enforce that image in the back of your ex’s mind. The one that makes them think of you in a negative light, as someone whom they wouldn’t be their romantic partner and isn’t what they want in a boyfriend or girlfriend.

Perhaps the worst example of this is those “serious talks” that many couples have in the days and weeks after their breakup.

You know what I’m talking about, you and your ex have a heart-to-heart conversation, hash out all the problems and issues that plagued your relationship and basically go in circles without ever really making any progress.

This type of talk with your ex is the absolute LAST THING you need if you want to get back together. It simply reminds them of the reasons for the breakup and brings the resentment, anger and other negative emotions back to the top of their mind.

If you’re going to take my word on just one thing, it’s that this is the wrong way to go about reversing a breakup.

Serious talks, trying to convince your ex that you’ll change if they’ll give you another chance, apologizing over and over. It doesn’t generate any of the strong feelings of attraction that will overpower their logical decision to break up.

Forget about that stuff and ignore anyone who tells you that you need to talk with your ex or open your heart to them in order to get them back.

It’s complete nonsense and I know this from many years of coaching clients in situations exactly like yours.

Those who try to go this route almost always crash and burn.

I think you get the point. Your ex has made his or her decision and you can’t say anything to change their mind.

Any active attempts to reach out to your ex, especially in the first few weeks, will usually end up doing more harm than good.

In order to fundamentally re-wire your ex’s feelings for you and go back to the days where he or she wanted to spend every waking moment with you, you have to use the strategies I share in my Ex Factor guide.

There are actually a number of things you can do right now, even if it’s only been an hour since the breakup, to begin subtly shifting your ex’s feelings and perception of you.

Here are some of the easiest ways to start changing your ex’s feelings for you.

I’ve covered this in depth in other videos and in my program, so for this video I’ll just say this: not talking to your ex at all for a period of time after the breakup can, on its own, make your ex change his or her mind. Sometimes even enough that they call you out of the blue and ask to get back together.

It’s because you’re suddenly disappearing after many months or years of daily contact. Humans are creatures of habit and sudden changes to daily routines are a huge shock that we don’t handle well.

When you disappear suddenly rather than keeping in touch or “being friends”, which allows your ex to gradually get used to life without you, you’re essentially shocking them into missing you like mad.

There’re many other benefits to this strategy, but suffice to say it works and you should employ this technique ASAP if you haven’t already.

#2. Pretend like you’re totally unaffected by the breakup and you’re moving on to bigger and better things.

Do you want to be in a relationship with somebody who sits at home alone crying every night or someone who is out having fun and enjoying life? Does knowing someone is heartbroken and struggling to cope with the idea of being single make them more attractive? Of course not.

We all want to surround ourselves with awesome people living awesome lives and your ex is no different.

Show him or her, by not being emotional about the breakup and by going out and living life to the fullest as soon as possible that you’re happily moving on to bigger and better things and won’t have any problem replacing your ex with someone else if they don’t smarten up and take you back.

#3. Send your ex subtle reminders of positive memories and happy times you shared together.

This is a bit more complicated because you have to know what to say to your ex when you talk with them or else you’ll just make matters. Worse. But if you know what to say and when to say it, you can force your ex to re-live positive memories and generate feelings of nostalgia that will make them long for the happy days when you were together.

Please visit my website www.BreakupBrad.com and watch the full video on there before you try to use this technique. I don’t want anyone watching this to get it wrong and shoot themselves in the foot.

I’ve also got a lot of other examples in my Ex Factor program, so you can use those techniques without worrying about screwing it up because I know for a fact that they work every single time.

#4. Use jealousy to your advantage.

This can be tough for some people, because you don’t always feel like dating somebody right after a breakup.

But it’s a very effective tactic if you do use it properly, because your ex sees you moving on and will immediately wonder if he or she has made a mistake in letting go of such a desirable commodity.

Think about it, if you dumped someone and then they were in a new relationship sooner after, or at least dating new people and having no trouble landing a date. Wouldn’t you assume even at least subconsciously that they were a great catch?

You don’t have to actually date anyone to make your ex jealous, though. There are things you can do to create mystery and intrigue that will almost certainly cause your ex to wonder what you’re doing and who you’re with.

That alone generates powerful feelings of jealousy and works like magic.

And of course, there are many other things you can do to safely incite a bit of jealousy, but I can’t cover them all here so please consider grabbing a copy of my Ex Factor Guide if you need more ideas.

Do be careful with this strategy, because if your ex actually knows you’re trying to make them jealous, it will backfire in a big way and do some serious damage to your chances.

That’s four things you can do to change your ex’s perception of you from “desperate loser ex” to “the amazing person I want to be with forever”.

It’s not always a quick process but if you do execute this technique properly, you’ll generate enough emotion and feelings of attraction within your ex that they will forget about the reasons for the breakup and tune out anyone who tells them getting back together is a bad idea.

Emotions, especially when it comes to love and romantic relationships, are incredibly powerful.

Powerful enough to force your ex to ignore logic and come running back to you apologizing for the breakup and asking for another chance.

Most of the time, they’re doing this to be controversial and to generate some publicity for their videos or their website.

If you succeed just by begging and pleading or through talk alone, then it’s almost certain that your ex was going to take you back anyway.

That’s why the actual breakup specialists like myself and a few others are universally in agreement about this, and we see it work for clients every single day.

Of course, I don’t mean to suggest that I have all the answers and can fix any broken relationship because obviously that’s definitely not the case.

But I can promise that following my advice, any advice of other people who deal with this stuff all day every day, will give you the best possible chance of winning back your ex. 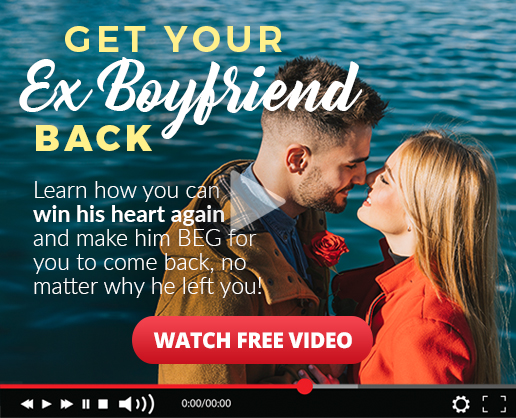