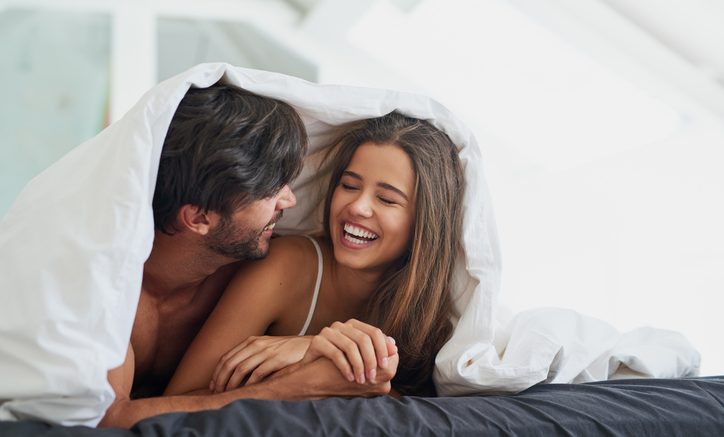 By Carlos Cavallo
From The Connection Code

I recently received this email from a student of mine:

Since I’m expecting that we’re probably going to sleep together, what I want to know is what he expects from me.

I don’t want to disappoint him…

Well, Tina – if you’re looking for a super wild sex tip that will rock his world…

There’s something you should know first: If you are on date number 3 – that does NOT mean you need to sleep with him.

A lot of women (and men) think that there’s this unwritten contract out there that if you make it to Date #3 you have to give it up. And that seems to me more like a negotiated settlement than a natural way to handle your relationship.

When I was actively dating, I made it a point to let the woman know that I don’t adhere to timelines or expectations. In fact, she might just have to wait a few MORE dates to jump in the sack, because I’m not in a rush.

Most of the time, this only made them want to seduce ME even sooner. But it was a boundary I stuck to for a reason. (And this was coming from a guy…)

One woman I dated for about 6 months told me after the “magical” date that she had worn her black knee-high boots because she wanted to “seal the deal.”

Look, if it takes 5 dates to get comfortable, then you need to hold to your own limit.

If it’s for real, he will have no trouble waiting.

Again, I get a lot of emails from women that feel that if they don’t give it up quick, some other woman will move in and steal him away.

If he’s so easily swayed by the scent of “eau de bedroom” – by that other girl’s easy sex – then your relationship would not have lasted anyway.

Sure, go ahead and try to make yourself think that your hoo-hoo is magical, but I’ll tell you right now, it ain’t. (And neither is hers… or hers… or hers…)

Yes, eventually sex will have to happen. But it’s what you bring to the relationship in your attitude and your heart that makes him stay.

Okay, so let’s jump in and reveal the 7 secret tips to what men like in bed:

Secret Tip 1: He likes it when you laugh…

Look, everyone’s so weird on that first sleepover that I’m amazed that anyone makes it to the next date sometimes.

You have to have some fun with your sexy time. Giggling is a great way to let a guy know you’re enjoying yourself.

Which is OUR biggest fear in bed – that we’re not making you happy.

Show him a smile and have some fun and you’ll both breathe a huge sigh of relief – AND have a lot more fun in the sack.

Secret Tip 2: He likes it when you’re enthusiastic…

I’ve had a few partners in the past that were so quiet and unemotional in the sack that I thought I was doing something wrong.

Sorry, but “she just laid there” will never be followed by “she was great in bed!”

The more excited and enthusiastic you are with us during the horizontal bop, the more we feel virile and manly.

If you want a great example of what men like to see in attitude, look no further than adult movies and videos. It’s not always LITERALLY what you’re seeing there on the screen. It’s more about the ATTITUDE of the women in the scenes.

You’ll see that the women are not afraid to let the guy know how much they want HIM.

That’s every man’s secret fantasy – just like yours: He wants to be desired by you completely in that moment.

Secret Tip 3: He likes it when you’re vocal, but soft-spoken…

Okay, this one is sure to raise some hackles…

Let me begin by saying that I do NOT mean that you should be a “quiet, submissive woman.”

What I’m talking about is a man’s desire for a woman who understands how to be assertive – and demure – while being POLITE.

This is one of those things I notice in couples these days – a kind of disrespect that feels like both partners just binge-watched “Married With Children” or some other show that glorifies the “angry relationship.”

So when it comes to the bedroom, he wants you to speak up and:

Tell him what you want…
Tell him what you don’t want…
Be gentle with your corrections – when he’s “doing it all wrong”
Just do it in a gentle way that doesn’t feel like impatience, scolding, or downright insensitivity. Because he won’t tell you this, but:

If a man gets bad or insensitive treatment in bed, he’ll immediately UN-commit from your relationship.

Secret Tip 4: He likes it in bed when you’re not begrudging…

Let’s face it – guys like “oral pleasure.” Every bit as much as you do when it’s done right.

But if that’s not your gig, sure that’s fine. But don’t pretend it is, then make it a “Look what I did for you!” event that you then throw in his face later on.

So be generous in bed, and never transactional. It’s not a place to “give to get” as those girls on “Sex & The City” would say…

Oh, and no teeth down there.

Secret Tip 5: He likes it when you touch him ALL over…

Guys are very responsive to touch. The slightest brush of your hand on our skin – and suddenly our pants don’t fit right.

So use that to your advantage!

Don’t just touch the OBVIOUS sexy parts – let your hand wander around his body before you get down there.

Some places to focus:

Stomach – go ahead, play with the tiny fuzz around his bellybutton…

Chest – finger-comb his chest hair, or if he’s not so hairy just use your fingertips to draw patterns…

Let your fingers do the talking – don’t be in such a hurry to get down and dirty. He still likes a little playful arousal and foreplay – no matter what you might think.

Secret Tip 6: He likes it when you’re just THERE with him…

Some after-chat is fine, but the best is when you’re just smiling, happy, and PRESENT with us after the deed is done. Weirding out at this point – such as crying, getting moody and distant, or any other weirdness – is … well, just weird.

If there are expectations – or should I say ‘sexpectations‘ – that weren’t met, you should find a way to nicely bring them up.

One of the bad dynamics in a relationship is when a woman expects a guy to just “know” something about her because it’s so darn obvious… and of course, he won’t because he’s not a mind reader.

And then she still feels that he should, and behaves as if an unspoken agreement was broken.

This is the ultimate in passive-aggressive behavior, and guys won’t tolerate it. It will actually bring out HIS passive aggressive.

Be open and transparent with guys… unspoken assumptions are what usually scare us off the fastest.

After you’re done with the whoopie… just chill out and BE.

Secret Tip 7: He likes it when you know what his style is…

Every guy has a particular style of lovemaking – and relationship-making – that suits him best. It’s his “code” if you will.

If you know what his personality is, you’ll have an immediate advantage at locking this guy down.

Especially if you know without having to ASK or interview him.

Sexual styles are related closely to PERSONALITY styles and types. I’m sure you’ve taken a few of these tests from time to time to figure out your personality type. Or maybe you’re really into horoscopes.

Well, I’ve got something that’s even BETTER than a horoscope…

They’re called Connection Styles. They’re the shortcut into any man’s mind – and heart!

Once you learn what a man’s connection style is you’ll know EXACTLY how to unlock him for love. You’ll also know how to talk to him, and really connect to his heart.

There are just a few primary styles:

The Bull
The Dog
The Turtle
The Cat
The Lamb

Do you know which type your man is?

If you don’t, you’re missing out on the easiest way to create a ROCK solid connection with him.

Go watch this free presentation on the Connection Code… Create A Constant And Unbreakable Connection With Him - Make Him Ignore Any Other Women That Cross His Path... Video: The #1 Secret To Making Her Crave You

Learn a simple secret to getting past a woman's defenses and making her see you as the one she can't live without. How Ditching The Rules Can Get You More Dates

There are so many dating rules out there that can drive you crazy, this article will teach you how to ditch the 'rules' to get you more dates... Video: How To Respark The Romance