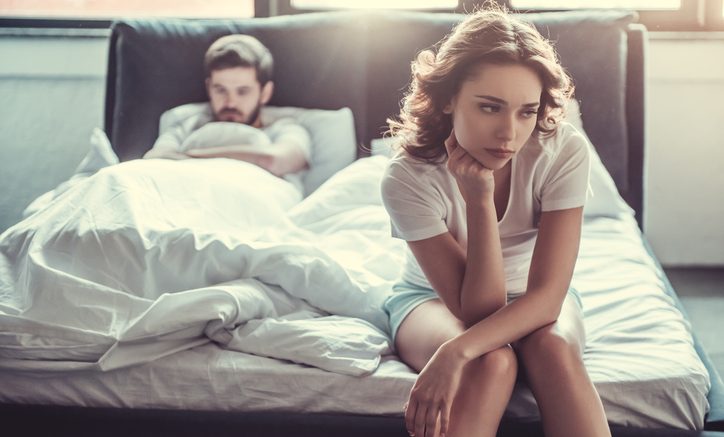 By Carlos Cavallo
From The Bad Boy Formula

The 10 Most Dangerous Mistakes That Drive Women Away

You know what? Even the best lovers are often guilty of mistakes in the bedroom… often WITHOUT ever knowing it.

It’s just a fact of life.

But that doesn’t mean that YOU have to!

Today, you’ll discover the most common mistakes men make in bed and what to do INSTEAD to drive your woman WILD with pleasure.

Mistake 1) Thinking She is Climaxing When She Isn’t

You may think that your lover is having multiple orgasms (or even AN orgasm) when she is not.

Grab a Cosmopolitan sometime and look at how many articles and comments on faking orgasms.

I’m not saying that YOUR GIRL is faking orgasms EVERY TIME but chances are there have been a few episodes of lovemaking where she was CRAVING something other than what you were doing.

It doesn’t mean you’re awful in bed; just that being a mindblowing lover EVERY TIME takes some specialized knowledge.

If you are giving your girl orgasms (and absolutely 100% sure of it) then congratulations! You’re one of the few guys who is ACTUALLY pleasing a woman REALLY WELL.

But if you’re not, it is crucial that you learn how…

Mistake #2) Not Giving Her a Variety of Sexual Experiences

A lot of guys who are new to sex – or are used to having sex with the same woman – tend to forget that women want different KINDS of sexual EXPERIENCES.

You might think that changing positions a few times and varying the speed of your thrusting is a different type of sex. But it is not.

Let’s look at an example.

Women love bad boys because of the emotions that a bad boy inspires in them. It is why when women cheat it is often with a “bad boy.”

However, you don’t need to be bad boy to create bad boy emotions within her in the bedroom.

Just be a bad boy yourself by spanking her, talking dirty, and giving it to her good!

Think of the cheesy paperback romance novels or current tv shows (Nip Tuck) they read with that long-haired douchebag on a horse (aka Fabio) on the cover.

…but what you can do is mix up your lovemaking with some romantic sessions in which you are telling your girl how beautiful she is to you and how much you love her.

The skinny is this:

You NEED to give your lover a variety of sexual experiences and you can give them all to her YOURSELF… but you have to mix it up!

Mistake #3) Forgetting To Be A MAN

Ask any 100 women off of the street and 99 of them will tell you that they want a man that TAKES CONTROL.

That said, she wants YOU to call the shots!

Yes you read that right.

Women are programmed to respond to strong, authoritative, confident men. It signifies that you are a protector, a leader, and a suitable mate.

Sure, it’s ok to ask her if she is enjoying something, but this is mostly reserved to specific technique when you are “going down”.

Save the talk about actual positions she liked for AFTER you are done.

Now don’t get me wrong – you are not making her a slave here but rather leading with authority and masculine strength.

Once you start doing this you will be able to do many things with her in the bedroom that she earlier would not do.

Many guys often think she is just uptight and her not being sexual if she doesn’t want to do something when in reality she just needs you to be a man and guide her with your strength.

You’ll be amazed at just how powerfully she responds!

Mistake #4) Thinking Sex Isn’t That Important To Her

If you want to know how much women LOVE sex… just think about how loudly they scream in the bedroom when they are getting it good!

You won’t ever hear a guy screaming like that!

You might THINK that your sex drive is much higher than your girls because YOU are usually the one initiating sex with her. But…

Unfortunately, it’s probably because you just aren’t getting her off.

Fortunately, this is an easy fix, and in a moment we’ll talk about how to do it…

Mistake #5) Being Silent/Emotionless in Bed

You may think that it is “cheesy” or “creepy” to talk romantically or dirty in bed. (you may think its weird to talk at all in bed) However, women HATE silent, mechanical sex. Why?

Let’s hit this again my friend: Women THRIVE one emotion.

Dirty talk or romantic talk is EXCELLENT at giving your girl STRONG EMOTIONS in bed.

Never think that it is solely your physical parts or motions you are making that get your girl off.

The most POWERFUL FEMALE ORGASMS are triggered by her mind, not by her physical body.

Unlock her mind through dirty talk, romantic talk, and emotional talk WHILE having sex and your girl will experience the strongest orgasms of her life.

Mistake #6) Trading Dinners/Flowers/etc To Get Sex From Her

Many men mistakenly think that women aren’t interested in sex (we already discussed how this is incorrect thinking) and that they have to “trade something” with their girl for sex.

This is why you see so many guys trying to have sex with their girl by first taking her out to a nice dinner or buying her gifts.

While doing nice things for your girl is awesome, it should NEVER be with the intention of GETTING SEX.

When you have to trade something to get sex from your girl realize that this is PROOF that you are not good enough in bed.

It is proof that she does not like sex with you since in order to DO IT you have to give her something in exchange.

When you are sexually satisfying your girl you will not have to trade ANYTHING for sex but your girl will often spontaneously text you sexy messages, buy YOU a small gift, or begin initiating sex constantly. Just wait and see!

Mistake #7) Not Giving Her Enough “Foreplay”

If you still think of “foreplay” as the activity before sex you need a quick mindset adjustment to change how much time you spend on foreplay.

Here’s a hint: Women consider foreplay as PART of the sex. NOT as a separate thing!

While a man is not capable of having a foreplay orgasm AND another orgasm right away when he penetrates his girl, WOMEN CAN!

Imagine if you could have orgasms during foreplay AND never lose your erection even the slightest and keep having orgasms as you penetrated your girl. You’d want to spend A LOT of time in foreplay too, right?

Well, your girl CAN have foreplay orgasms AND penetration orgasms so she DOES want to spend a lot of time on foreplay. As she should!

As a rule of thumb, spend at least the same amount of time on foreplay as penetration and you can always spend EVEN MORE time in foreplay.

You can never get her too turned on and it will only make the penetration better when you are finally inside of her.

This mistake is well known and very simple, but no list of mistakes in the bedroom would be complete without it.

But while all guys know they need to last long… they don’t necessarily know HOW LONG that is!

Well, after talking to hundreds of women about the subject, I’ve discovered that if you can last at least 10 minutes, most women will be plenty happy with that.

Sure, they might be even happier if you are up for a “round 2” after a break in the action… but if you can last for 10 minutes in the first round, then trust me, you are fine!

It’s no secret that women are a LOT moodier than us men.

But if you’re in a relationship with a woman and she seems to keep getting more and more moody over time… this is often because she isn’t getting what she needs in the bedroom.

As we talked about before… while women aren’t usually as sexually aggressive as men, they do love and NEED sex just as much!

But here’s the thing… if you’re not giving her orgasms… then sex does her no good!

Can you imagine jerking off but you could NEVER orgasm?

You’d begin to enjoy it less and less each time. Eventually, you’d get so frustrated by the inability to “finish” that it was just easier to avoid it COMPLETELY!

If you can’t give her orgasms why WOULD she want to have sex with you?

If your girl is not wanting to have sex with you as much as you want then this is EXACTLY what has happened to her.

In the beginning, she may have tolerated sex because she was really into you.

Now that you have been together for a long time and sex isn’t satisfying for her it is more fulfilling to get herself off when you’re not around.

This leads to only having sex with you on special occasions, or when she feels obligated (like if a guy bought her a fancy dinner or some sort of gift.)

If you recognize any of these signs it’s time to step up your sex game NOW before the sex drought gets even worse.

And when you do, you’ll discover that when you are completely rocking her world in bed, not only is she in a better mood on a day-to-day basis but SHE’LL start initiating sex with YOU!

A close friend of mine who is somewhat of a love-making expert himself told me something that I didn’t’ believe at the time… but I now KNOW to be 100% true:

IF YOU ARE GIVING HER THE BEST OF HER LIFE SHE WON’T CARE IF YOU ARE HOMELESS LIVING IN A CARDBOARD BOX… AS LONG AS YOU CAN HAVE SEX IN IT!

When I heard this I thought he was totally full of it… but as my own lovemaking skills improved and then I heard about the success other guys were having, I realized this is completely true.

Women are biologically “made” to be child bearers and select the highest value man to have a child with.

Don’t you think that the ability to give amazing sex is one of the highest values a man can have?

Especially since so few men actually are REALLY GOOD.

If your girlfriend or wife is often starting arguments, not wanting sex, or acting “distant” in some way it is time to stop blaming her.

Re-examine your sexual ability because the real culprit is the inadequate sexual pleasure.

Mistake #10) Not Getting Help

Top performers in any aspect of life realize that MASTERY is a journey not a destination.

And guess what… sex is no different.

To be an amazing lover you can’t ever be blinded by sexual arrogance. Never think that you know EVERYTHING.

You may know A LOT but there are ALWAYS new tricks or tips to get you to the next level.

If you’re serious about getting this part of your life together, check out the video below… I’ve Changed, But She Won’t Forgive Me

To think that good relationships are ones in which there is no cheating (either physical or emotional) is to live in a fairy tale bubble that doesn’t exist. Let’s break it down... How to Respond to Your Ex’s Text Messages

In this article, you'll learn exactly how to respond to your ex to ensure you have the best possible chance of rekindling that spark and getting a second chance...