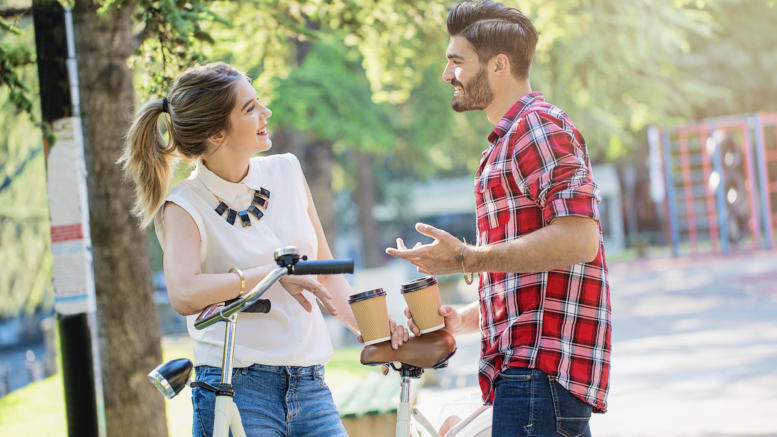 How to Have A Perfect First Date (Make Him Come Back For More!)

When it comes to the ideal date, it doesn’t matter if you’ve been on five or fifty others before.

Why? Because as much as experience can be helpful, if you’re not bringing your A game, then you’re not doing it right.

Let’s start by saying it’s important that your energy reflects what you hope for in a relationship.

For example, if you’re looking for a fun fling then you should be flirty and promiscuous.

If you want something more serious, then you should make a point to really get to know the guy you’re with.

That’s not to say that you have to directly let your date know that you’re looking for a long-term lover, but instead it’s all about your energy.

Regardless of what kind of romance you’re looking for though, to make him want you it’s important that you’re happy, open-minded and confident.

When you nail this attitude, you’ll be radiating sex appeal and admiration.

The DO’S for having the perfect first date:

We’ve all been late or rushed for something, whether it was work, a social event or family gathering.

That frantic feeling you get is stressful and overwhelming.

You don’t want to approach your date the same way because no matter how well you try to hide it, he’ll be able to see the chaos you’re feeling.

Instead take time to relax beforehand.

Do whatever it is that puts you at ease, whether it’s yoga, a cup of tea or a long walk.

Simply getting into a calm mindset will make all the difference.

In order to fit in this extra time, it’s important that you make a schedule for yourself.

Say, an hour to shower and do your hair and makeup.

Another half hour to get dressed and pack your purse.

Whatever works for you.

Just be sure to give yourself an extra half an hour for leeway.

You never know when disaster will strike and that buffer zone can save your butt.

Do #2: Choose the Right Outfit

You may think, “First date! I need to look amazing!” but if you wear a little black dress to a laid-back pub or a movie, you’re going to look out of place.

Not only that but you’ll also feel uncomfortable which will show and make him uncomfortable, too! Instead, dress for whatever it is you’re doing and wear something that you know looks good on you but won’t stop you from being cool and collected.

To save you from stressing out, choose your outfit the night before.

Make sure it’s clean and ironed and if you’re into accessories, set those aside too.

And my last pro tip on this: Always have a backup pair of nylons.

This may sound obvious but so many of us are obsessed with routinely checking our phones every so often.

Doing this on a date is a major deal breaker.

Have you ever tried to have a conversation with someone who’s glued to their phone? It’s rude and frustrating, isn’t it? Instead of showing him that you’re more into the online, be present and leave your phone until after you’ve said your goodbyes.

Sure, it can be tempting not to “check into” the hottest new nightclub on Facebook or to snap a photo of your gorgeous meal to post to Instagram, but seriously, hold off, even if he’s doing it.

Do #4: Choose the Right Environment

How often do you hear of people on a date going for dinner or to a movie? All the time! Instead of following the same old song and dance or in this case dinner and a movie, make an effort to plan dates that you can both enjoy.

That said, this doesn’t mean that you should put down his dinner plans or suggest you change them for your brilliant ideas.

This more so goes if he’s open to your input beforehand.

Doing something fun like dancing or playing pool will create positive emotions and don’t forget, laughter is the best tension killer.

This doesn’t mean you have to make all the decisions on your date but you should definitely have some input.

If asks if you prefer Italian or Chinese food, tell him.

He says movie or bar, you pick.

Guys hate when girls say “I don’t know” or “It doesn’t matter “to their questions and going out with someone who has no opinion or preference is super draining.

Don’t be afraid to speak up.

Do #6: Keep the Conversations Light

You’re out to have a good time together, to make sure the conversation is enjoyable.

There is absolutely no reason for you to talk about your exes or any other heavy subjects on a first date.

Not only will it put a bad taste in his mouth, but it’ll also make you look unbalanced and not ready for a new relationship.

Instead, focus on developing a connection so that he feels compelled to call you back.

Ask him insightful questions and take a genuine interest to his life, job and anything else that he shares with you.

You can even try to gain a bigger picture of who he is by asking questions like “How did you get your job, hobby, interest, etc.

Make sure that these are semi-general so that he doesn’t feel bombarded or pressured to reveal his entire life story.

And above all remember: Men want to be with women who are fun and take their stresses away, not cause them.

Make sure he feels good being around you.

If you order the small garden salad and the eat half of that, he’s not going to think you’re skinnier, prettier more feminine or mysterious.

He’s going to think you have weird food issues and it’ll probably make him a bit uncomfortable.

Guys like it when women eat unselfconsciously and with pleasure.

They find it refreshing that she can be comfortable and down to earth.

Now the opposite goes for drinking.

Just because you can finish two liters of wine no problem doesn’t mean that you should.

Going overboard with booze on a first date is never a good idea.

Not only does it make you more likely to say things that you wouldn’t otherwise but the last thing you want is to have to be carried home!

Do #8: Handle the Bill Gracefully

There are two polite ways to do this.

The first way is when the bill comes, wait for him to make a move for it.

When he does, reach for your purse and continue the payment process until he says “I’ve got it.

You can then ask if he’s sure, to which he’ll probably say “yes,” so thank him and drop it.

You don’t want to come off as stubborn or overbearing on your first date, so let the man pay if he wants to! If he doesn’t say anything about the bill then you’ll have to split it.

Be careful not to jump the gun on this one- if you speak too soon then he may think that you’d actually prefer to split it.

The second way is to reach for the check when it comes instead of waiting for him to make the move.

If he insists, offer to split the bill, or at least leave the tip.

He’ll probably decline, so make sure you that you offer to get the cab to the next destination, the movie tickets or a round of drinks, etc.

Don’t play games; say what you mean and mean what you say.

Surveys have shown that the number one reason why a guy doesn’t call a woman again after a date is because they weren’t grateful, so it’s important to always thank him at the end of a date.

Since some men think women are just in it for the free meal or drinks, prove him wrong by texting him an hour after the date has ended to thank him again.

When you do this, don’t shorten the text to a one-word “thanks,” it sounds insincere.

No matter how terrible a date may go, there is never an excuse for rudeness so even if you don’t hit it off, he will appreciate that you had the class to thank him anyways.

If a guy wants to take you on a date it’s because it’s interested in getting to know the real you.

Instead show him your true colors.

After all, you want to be with someone who likes you for you, not for an act.

Well that’s all for this video, thanks so much for watching.

I hope the dos I’ve shared here today help you have the perfect first date.